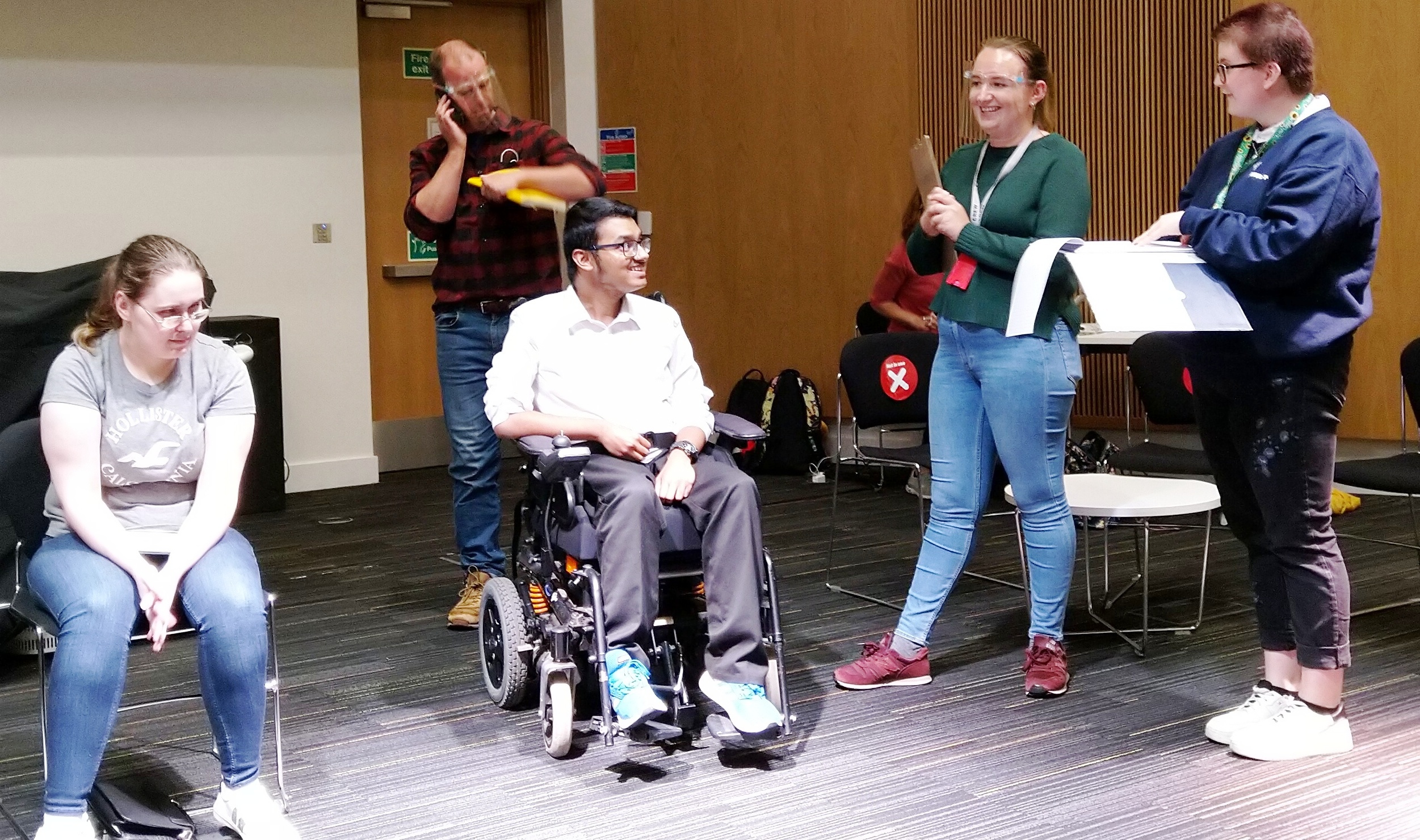 In these times of deepening democratic deficit, with trust in government at an all time low and social inequality spiralling, we believe it is more important than ever to place people at the centre of the big issues facing society — from mitigating climate breakdown, to social housing policy, and improving health and social care.

Deliberative and participatory processes remain an excellent way of ensuring that everyone achieves greater individual and collective authority and autonomy, and building a democracy where everyone’s voice counts.

Despite the pandemic, which forced us to innovate in how we work, 2021 was a fantastic year for us. We’ve delivered more projects than ever and we’ve added new associates to our diverse pool of expert facilitators.

We’ve focussed primarily on climate change in our facilitation work, which has many exciting and interesting directions — from running citizens’ assemblies, a groundbreaking social housing tenants citizens’ jury, and bringing legislative theatre to the COP26 climate conference in Glasgow. Here’s a recap of the year.

Commissioned by the North of Tyne Combined Authority (NTCA), the North of Tyne Citizens’ Assembly on Climate Change saw 50 people from the north east of England come together to help shape the region’s response to the climate crisis.

The Assembly started in February 2021 and ended in March, running for a total of 30 hours over eight sessions. In a statement in its final report, the Assembly said:

“We now see that climate change is a credible, urgent and real threat. It threatens all we value: our families, our communities and our planet. Individuals, communities, businesses and government must all be involved in tackling the climate emergency, putting Climate Change at the forefront and heart of every single decision.”

The Assembly’s recommendations included retrofitting the region’s housing stock to a sustainable standard by 2030, creating a public education strategy, and promoting apprenticeships in renewable energy. Read more about the process here.

The Glasgow Youth-Led Climate Crisis Legislative Theatre project, originally funded by a NESTA Democracy Pioneers award in 2020, has been a creative and powerful way for young Glaswegians to directly influence Glasgow City Council (GCC) climate policies in the run-up to COP26.

Glasgow City Council committed to take policy ideas from this process into its new Transport Strategy and upcoming City Development Plans. This commitment enabled the young people to use theatre to explore ways in which public transport could be more accessible and affordable, or how neighbourhoods and open spaces could be safer and meet the whole community’s needs.

After a summer of intensive rehearsals, the group gave its main performance to an audience of council policymakers on 14 September. The project didn’t end there. Many of the young democracy pioneers went on to take part in activities during COP26.

We were delighted to see CJ, one of the participants, give a really powerful speech about climate change, community involvement and her experience of legislative theatre at COP26. Katy Rubin also featured in a film created by Glasgow City Council. Read more about the project here.

The Copeland People’s Panel on Climate Change, which ran between July and September 2021, comprised 30 residents from Copeland who met between for 30 hours to discuss how the area should respond to climate change.

In its statement, the Panel said:

“We have felt the power of coming together and ask that Copeland Council harness the power of community involvement at the core of its vision for addressing climate change and initiating the leadership that is so badly needed.

“Local leadership must be energetic and heartfelt and build a credible vision to address the climate emergency otherwise our reality is no future. The people of Copeland will be badly let down, if the momentum started by this process is not carried on by the local council, its representatives and others.”

We were also delighted to facilitate the Copeland Young People project in parallel with the People’s Panel, whose report we will publish in 2022.

We’d like to thank the Zero Carbon Cumbria Partnership for kindly part funding this project through the National Lottery Climate Action Fund.

This saw 30 social housing tenants from across the north of England meet online over 10 weeks between July and September 2021 to discuss how best to work together to tackle climate change in their homes and neighbourhoods.

Led by Shared Future Associate Andy Paice, the Jury presented its recommendations to the annual summit of the Northern Housing Consortium (NHC), who commissioned the process.

As part of writing recommendations, the jury developed its own statement which included a compelling ‘call to action’:

“It’s been an education and it’s been eye opening. Climate change needs to be taken seriously, not just for now, but for future generations. We feel there is too much talk and the time has come for action … When you look at our recommendations, go forward with an open mind, listen to what we have to say and above all — let’s take action and act together.”

Watch this brilliant video of the participants and read more about the project here.

We are delighted to be working on this new programme to support local authorities in England to plan, commission and deliver high quality public engagement in their climate decision-making.

Working alongside Involve, Demsoc, UK100 and Climate Outreach, we will give local authorities selected training and guidance to develop their capability and confidence in planning, commissioning and overseeing public engagement in climate decision-making.

On the programme, funded by Calouste Gulbenkian Foundation (UK branch) and Esmée Fairbairn Foundation, local authorities will also have the opportunity to work with us to deliver a high quality piece of local public engagement in climate decision-making. Read more here.

The jury, which is ongoing, is supporting 25 citizens to consider what needs to change in Southwark to tackle the emergency of climate change effectively and fairly.

The jury is meeting over eight sessions: six online sessions between November and ending in February. We held daytime sessions on 4 December 2021 and 22 January 2022.

The jury, also ongoing, is seeing 20 local citizens come together to shape action taken on climate change across Furness.

Their starting point will be to consider the question; “What should happen in the Furness area to address the emergency of climate change?”

The jury, launched in October 2021, will hear a range of expert opinions before reaching a series of recommendations for the council, and is meeting for ten sessions over a three-month period between November and February.

We’d like to thank the Zero Carbon Cumbria Partnership for kindly funding this project through the National Lottery Climate Action Fund.

Jointly funded by Erasmus+, and working with colleagues in Poland, Spain and Northern Ireland, this project has been working to develop a ‘toolkit’ to encourage best practice and the inclusion of Young People in local participatory budgeting (PB) processes.

The aim is encouraging schools, communities and public bodies to develop new approaches to youth inclusion, harnessing the enthusiasm and passion of young people to shape their future.

So far the project has collated many case studies of youth focussed PB, completed its testing phase, and is now in the final stages of developing its comprehensive youth engagement toolkit. Though delayed by the pandemic, we and our European partners are planning a range of events for early 2022 to share the learning from more than two years of research. Read more about the project here.

What else we’ve been up to …

Alongside our public facing engagement work listed above we have continued to undertake work either on behalf of other organisations or as part of our social mission. These include:

On behalf of a respected charity, which produces nationally important research and campaigns on issues of poverty and inequality, we have been working intensively to facilitate their co-design project in partnership with a diverse group of unpaid carers based in London.

It is looking at finding solutions to the financial insecurity, barriers and exclusions faced by unpaid carers — those looking after family members or dependants — often whilst living in conditions of extreme poverty, and facing isolation and exhaustion.

The project has been running since early this year and due to become public in the middle of 2022, with, we hope, some impactful policy recommendations that will improve the lives of some of the most marginalised and invisible members of our society.

In 2021, we led a number of online learning and networking events on behalf of GMSEN, and contributed to the wider work of others in that sector, such as the GMCA social enterprise advisory group.

Alongside this we have continued to offer a listening ear, and provide free advice to a wide range of newly formed social enterprises across Greater Manchester and Lancashire as part of our social mission to grow the social economy.

We have continued to promote the cause of participatory budgeting by hosting the PB Network website, engaging with international practitioner networks, and delivering advice on small scale PB grant-making projects on behalf of local groups and for local authorities (such as Winsford Town Council).

We’ve also followed the exciting developments on PB in Northern Ireland and Scotland. We also contributed to the recently updated PB World Atlas, and acted as PB mentors on behalf of PeoplePowered.

Throughout 2021, we have continued to engage and network widely. Attending and giving presentations at conferences for bodies such as the Northern Housing Consortium, PeoplePowered or at the Fuel Poverty Research Network’s ‘Making Decarbonisation Fair’ conference.

As part of our membership of the DemocracyRD network we took part in their week-long virtual conference in March. Also in March, as part of our long involvement with the CTRLshift network, we were involved in the ‘Exchanges for Change’ project, based in North Staffordshire and funded by Local Trust, which looked to develop grassroots regeneration projects.

And last, but certainly not least, we enjoyed being on one of the Reasons to be Cheerful podcasts with Ed Miliband and Geoff Little.

Overall, alongside all the contracted and free work we’ve delivered, it’s been a busy 2021!