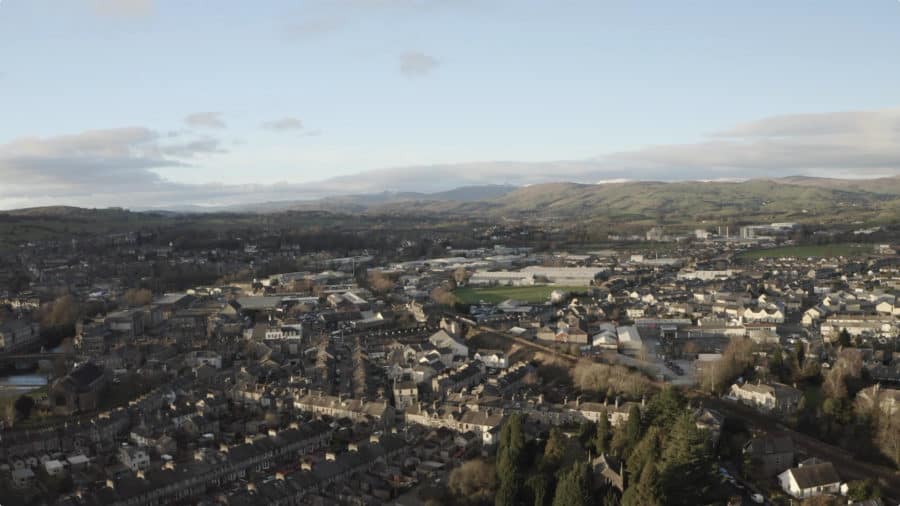 Few would deny the legitimacy of deliberative democratic processes. Citizens’ assemblies – or citizens’ juries, which have fewer participants – can provide a mandate for politicians to take action commensurate with the scale of the problems at hand. They reflect the diversity of the local population and can also play an important role in bringing historically marginalised voices to the table.

Climate change citizens’ assemblies and juries are now commonplace. They take place at a national level, like in France and the UK; the level of the Combined Authority like the North of Tyne; and the level of local authorities like Camden, Lancaster, Leeds, Newham and Oxford. But is there a role for deliberative democracy processes at the level of the Town or Parish Council?

The Kendal Climate Change Citizens’ Jury, commissioned by Kendal Town Council gave us at Shared Future, as the facilitating team, an opportunity to reflect on the importance of instituting deliberative democracy at the level of a town and exploring how we best go about it.

What role do Town and Parish Councils play?

As the tier of government closest to citizens, Town and Parish Councils are in a unique position to stimulate grassroots action and show local leadership in action. Friends of the Earth identified ‘20 actions parish and town councils can take on the climate and nature emergency’ which centred on demonstrating leadership, using powers wisely and acting as a force for good. The National Association of Local Councils also offers a raft of examples of town and parish councils taking significant action in energy, travel and housing, as well as playing a vital convening role.

As the tier of government closest to citizens, Town and Parish Councils are in a unique position to stimulate grassroots action and show local leadership in action.

Yet even if Town and Parish Councils play an important part in the lives of local communities, how can these cash-strapped authorities receive the resources they need to run a quality process? To put this into context, Kendal Town Council has an annual turnover of just £430,000. South Lakeland District Council – the next tier of local government – has a budget of £48 million.

Kendal Town Council had to think imaginatively. As well as using some of its own budget, it successfully applied for financial assistance from the next two tiers of local government, the District and County Councils.

This still left a considerable shortfall. To plug this gap, town councillors successfully led a crowdfunding appeal. 181 pledges of financial support came in, including from three local political parties, local environmental groups, private business and individuals. As well as providing a valuable cash injection, this meant 181 different people and organisations had a stake in ensuring the jury was a success and that its recommendations were implemented.

A second crowdfunding appeal saw a further 59 supporters donating money for the creation of a short promotional film. Kendal’s successful crowdfunding shows there is an appetite for community-led democratic deliberative processes.

An oversight panel made up of a wide range of key local stakeholders was established to ensure that a balanced and rigourous process was followed. The jury organisers, backed by the oversight panel, felt that some of the tasks necessary for a high-quality Jury process could be carried out by well supported volunteers. They recognised the huge amount of expertise which exists in every community. Through the success of the crowdfund they also knew there was genuine enthusiasm for a community-led vision for addressing the climate emergency.

Early in the process potential volunteers were invited to attend an online discussion where we explained the process  in more detail. From this meeting four volunteer subgroups were formed; a creative group, designed the jury logo and website artwork. They also formed a partnership with the Kendal Torchlight Carnival.

This meant that large banners were displayed for four months across the town encouraging members of the public to think about the jury’s question ‘what should Kendal do about the emergency of climate change?’; an evaluation group, which worked to assess the effectiveness of the jury; an IT group that gave their free time and skills to design and establish a dedicated website as well as offering to support jury members with the use of the online platform if required and finally a communications group.

Through the success of the crowdfund they also knew there was genuine enthusiasm for a community-led vision for addressing the climate emergency.

People’s willingness to volunteer is not an argument for running an assembly or jury on the cheap. Any important and robust democratic process demands appropriate investment. Huge sums will be spent on achieving net zero in coming years, requiring robust oversight and community involvement.

Additionally, it is important to consider how we utilise volunteers. Unless carefully managed the actions of passionate volunteers could serve to undermine the independence and legitimacy of a process. However, Kendal’s experiences suggest that there is much to be gained from looking at a community’s assets as well as the project budget sheet.

The first climate jury session was held in early July 2020 and its recommendations were complete by late October. In that time jury members heard from and questioned seventeen different commentators before producing their 27 recommendations, focusing on food, political leadership, energy, transport and other key topics. The Kendal Town Council’s action plan for 2021/22 supports many of the jury’s recommendations and includes projects that will extend allotment sites, audit the solar potential of Kendal, research the feasibility of a municipal composting site and lobby for better cycling infrastructure.

Large banners were displayed for four months across the town encouraging members of the public to think about the jury’s question ‘what should Kendal do about the emergency of climate change?’

Furthermore, the membership of the jury’s 18 strong oversight panel (which brought together the private sector, academia, a housing association, environmental activists and all three tiers of local government, as well as the local MP) means there are many avenues beyond the Town Council for taking action on the jury recommendations. The breadth of the Kendal oversight panel demonstrates the convening power of a Town Council.

The legacy of the investment in the Kendal Climate Jury continues.The Town Council has raised awareness of the work of the jury and its recommendations through the distribution of the crowd funded promotional film and an inspiring tour of the meetings of key local decision-makers. One of the two Town Council staff accompanied two jury volunteers to attend (via Zoom) exclusive showings of the film at the local branch meetings of three local political parties as well as local council scrutiny meetings. One of these parties is now preparing its own response to the recommendations.

Also, further demonstrating its convening role the Town Council will, from June 2021 onwards chair a jury recommendations panel, to which organisations will be invited twice a year to share progress and best practice and develop new partnership approaches to climate challenges. The Town Council will also continue to develop its own action plan to implement recommendations.

Peter Bryant of Shared Future worked with a team of facilitators and technical support to deliver the Kendal Climate Change Citizens Jury.