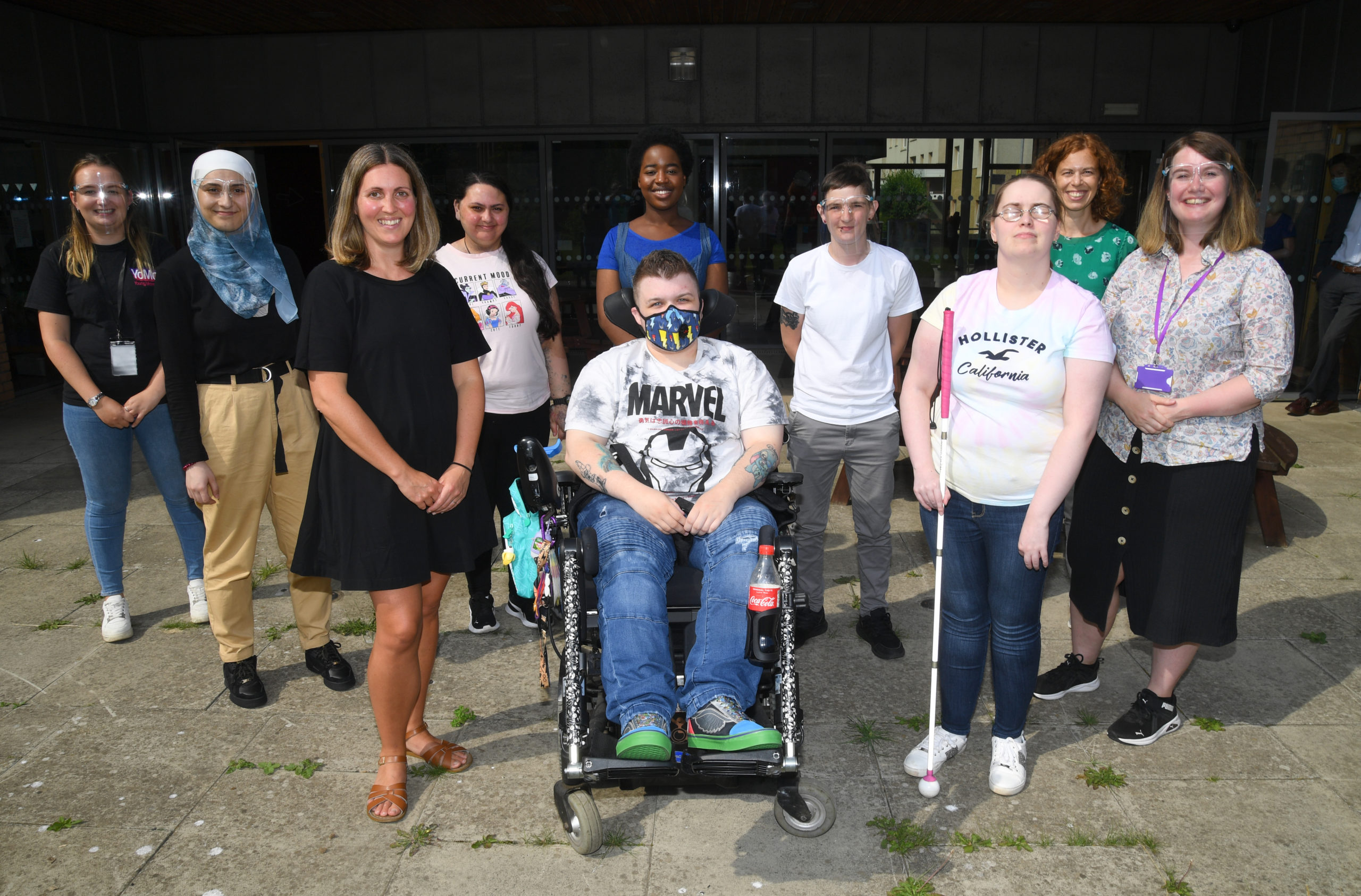 Katy Rubin reflects on Democracy Pioneers, a project she facilitated for Shared Future to engage Glasgow’s policymakers on climate change through the medium of theatre.

On 14 September, eight young Glasgow residents engaged policymakers and councillors, along with neighbours and advocates, in a rigorous discussion on sustainable transport and the future of Glasgow’s open spaces through the medium of theatre, as part of the Democracy Pioneers project.

The project, originally funded by a NESTA Democracy Pioneers award in 2020, has been a creative and powerful way for young people to directly influence the climate-related initiatives of Glasgow City Council (GCC) in the lead-up to COP26 climate conference being held in the city in November.

The pandemic delayed the project – as well as COP26. But with plenty of safety precautions in place, a wonderful group of young people and staff from Young Movers (YoMo) and Glasgow Disability Alliance (GDA) began to meet in person in July this year. It was the first time many of us had gathered in person since early 2020, which was disorienting but delightful. Many of the actors in the project had not directly engaged in climate activism before, but were very invested in being able to influence the ways in which Glasgow can become a greener city and a city that functions better for all its residents.

The GCC had committed to ideas from this process feeding into its new Glasgow Transport Strategy, encompassing an Active Travel Plan and a City Centre plan, among others; and the upcoming City Development Plan, which looks to integrate sustainability measures into parks and open spaces, building regulations, and more.

Those commitments led the young people to begin Democracy Pioneers by investigating ways in which public transport could be more accessible and affordable, and how neighbourhoods and open spaces could be safer and meet the community’s needs, in order to decrease emissions and reduce the need for travel.

We began by playing theatre games and making physical images that demonstrated the group’s dreams and visions for a greener Glasgow.

These helped everyone explore the barriers they faced when trying to make choices that support sustainability, like taking public transport, using a bicycle or buying vegetables instead of burgers. We made visual art and even musical representations of these challenges, which led us to develop scenes at the bus stop, in the park, and outside a Council building before a community consultation on climate.

We held a workshop performance in late July for Council staff where we began to develop policy proposals. The young people clarified that they wanted to address communication challenges between the Council and young people regarding shaping sustainability policy. They also stressed they had a lot of knowledge and experience which should inform policymaking.

We also learned more about the Council’s efforts towards consultation, which due to design defects weren’t consistently reaching the community. In September, we added new scenes to the play to reflect those challenges. We were also joined by a guest actor: a Council staff member from the transport team, who embodied powerfully (and hilariously!) those issues from a Council perspective.

The performance in September had a much broader audience, including friends and peers from YoMo and GDA, and staff from related advocacy groups like the Glasgow Centre for Population Health.

This set the scene for a robust and lively debate and some funny solutions improvised on stage. In one performance, the Head of Sustainability for GCC, Gavin Slater, came on stage, took on the costume of a bus driver, disregarded a passenger’s insufficient fare and allowed them on the bus – which, he said, pointed to the ways in which Council should support front-line gatekeepers in being more flexible with rules, when it allows residents to make more sustainable choices that they otherwise wouldn’t afford. That’s a culture and training intervention!

After several more improvisations, every audience member and actor offered policy proposals to address the problems in the play. Our policy team, including Deborah Paton of the Transport team, Alan Duff in Planning, Gavin Slater in Sustainability, Councillor Anna Richardson, and Chris Duncan in Communications, helped narrow down three dozen ideas to these three, followed by a debate with amendments offered by the audience and negotiated with the policy team. Some outcomes have already emerged out of the proposals from both events, including the GCC planning department creating an interactive map where residents can access planning applications that could impact their local parks and neighbourhoods (currently in progress); and the development of an easy-read version of the Transport Strategy.

“I have really enjoyed the whole legislative theatre process and voicing my concerns as a young disabled person to those who can actively help to make much needed changes.”

Overall this project presented Shared Future and myself, as the legislative theatre practitioner, with the unique challenge of finding a meeting place between the daily experiences of young residents and the policymaking needs of Council staff and elected members. That challenge is especially real when it comes to climate policy; how can a municipality change its practices to ensure the wellbeing of the planet in the future, while also making life better for local residents in the current moment?

We were delighted that many of the participants said they felt the project closed the gap between them and policymakers. “I have really enjoyed the whole legislative theatre process,” says Amy, a member of GDA and an actor and creator in the project, “and voicing my concerns as a young disabled person to those who can actively help to make much needed changes.”

We’ve had the honour of being part of Gulbenkian Foundation’s COP26 collaborative evaluation project, where we’ve learned about various COP-related public engagement projects. Some of these aim to influence policy makers directly, and others aim to shift public sentiment towards climate awareness through arts projects.

This project is about the challenge of uniting creativity, storytelling and creative expression with the matter of changing policy. By engaging elected officials we hope it can have tangible outcomes, increase civic participation and, possibly, produce better policy interventions.

The Democracy Pioneers’ final performance was held in Glasgow on Saturday, 23 October 2021.

Shared Future would like to thank Katy for tirelessly organising this process, to everyone in the various council policy teams who have participated and Glasgow City Council for its continued support.