Climate Assemblies and Juries: A people powered response to the climate emergency 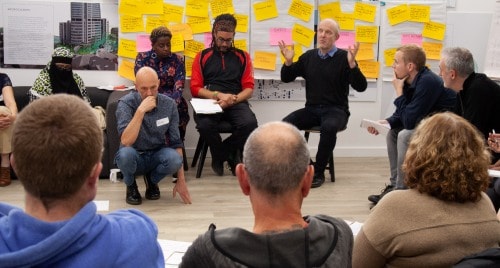 With funding from the Place-based Climate Action Network (PCAN), an ESRC supported network that brings together the research community and decision-makers in the public, private and third sectors, Shared Future CIC has published a guide for local authorities and other bodies.

The guide aims to support local authorities and other bodies thinking of commissioning a citizens’ assembly or jury. It considers how such processes might address the climate emergency, what is involved and approaches to design and delivery.

There has been a flourishing of citizens’ assemblies on climate change in the UK, with many local authorities commissioning local assemblies and juries, often as a follow up to declaring a ‘climate emergency’.

What is a citizens’ assembly or jury?

Typically assemblies and juries bring together between 20 and 150 members of the public to deliberate for over twenty five hours. The members are randomly selected to a profile that reflects the diversity of the population the process is serving. After sharing ideas and opinions with each other and hearing from a range of outside speakers, the participants write a set of recommendations.

Depending on how they are designed and commissioned, these type of deliberative mini-publics can be a tool for creating public dialogue. Be used for identifying nuanced public opinion on a topic. They are useful for building consensus, for producing a set of prioritised recommendations or creating space for public engagement within policy making.

When done well commissioning a citizens’ assembly or jury can be truly transformative for the commissioning body, the participants, and for the wider public.

They can create a robust mandate for politicians to take action. They can improve trust between citizen and government, produce better and fairer policies and act as a catalyst for better partnership working amongst the range of organisations that may have a role to play in addressing the climate emergency.