Home » SFCIC Blogs » People led democracy in Denmark: What can we learn from grown up politics?

People led democracy in Denmark: What can we learn from grown up politics? 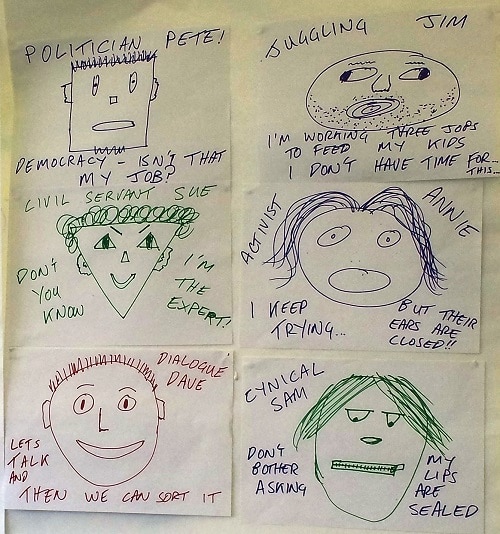 I can hardly believe it is only two weeks since I was on a small Danish island, in the midst of the Baltic sea, taking part in the Danish Folkemoedet, or People’s Meeting.  Sharing big ideas, rubbing up against national politicians, in their ill fitting jeans and over-shined shoes, and celebrating the fact that every one – young, old, rich, homeless, black or white – had a valid opinion and something of value to add.

Folkemoedet is like all the UK party conferences, the green field at Glastonbury and the AGM of the Danish Women’s Institute happening at the same time.  Along with quite a bit of artisan beer and smoked mackerel.  Inspired by similar open politics conferences in Sweden, Folkemoedet could never happen here, today, in the fevered and messed up politics of the UK.

A week before Brexit, that subject was obviously on the agenda of a good many of the hundreds of workshops and debates attended by over 40,000 people per day.  But Denmark seems more at ease with its identity, retaining the Krone as its own currency, and avoiding the fake austerity we have in the UK.  Comfortable to know it doesn’t have to be the biggest or the best, but it can have a bloody good time being pretty good.  They looked on somewhat mystified by our referenda.  Why now? For what purpose? Won’t it end in tears?

Too right.  The tears of good people who have lived here years, abused in the street by racists.

Taking a break from the calmer atmosphere on Bornholm two weeks ago I took the opportunity to sit on the beach, watch the tall ships in the harbour (each hired by different political parties, from far left to pretty far right, all jostling for space, in a friendly way, in the small harbour of Allinge) to re-read Kurt Vonneguts’ harrowing but comic anti war story Slaughterhouse 5.

A book in which we can despair at the second world war destruction of Dresden by British and American bombers.  More people died in one night there than at Hiroshima.  Laugh at the foolishness of our generals who covered it up for years afterwards.  Celebrate the forgiving endurance of its main character, Billy Pilgrim, unhinged in time and reflecting on a long life, where the common narratives of A+B=C don’t always work.  A timely reminder that Europe was not always at peace.  Things go backwards as well as forwards.

Such is Brexit.  A formula for disaster in my view, but I’m happy to accept I may be wrong.  Time may tell.  An over simple question with no simple answers?  As we watch the pathetic game-playing of our political elites what does the ordinary Joe, or Julie in Warrington, Worksop or Waverley do?

If we lived our lives like the bratty and spiteful Johnson-Gove twins, or had uncle Farage and aunty Eagle for our own Christmas dinner, we might decide that it was time for a bit of self examination.  A bit more commonsense being talked within the family.  A bit of speaking truth to power.  I think it’s time to grow up.  All of us.  And stop playing the role of google-eyed children watching our supposed elders and betters squabble over the divorce arrangements.

Let’s take a leaf from a more grown up politics.  One where you could hear a Nobel prize winning academic talk about the dangers of American militarism, followed by a protest singer talking about the rights of migrants, and then finish off with a full on political debate, like our Question Time, held in an open sided tent with a thousand people watching.  Done with humour and respect, and a lot of good grace.

I was there because of Shared Future’s connections with the Danish Centre for Good Governance.  An organisation we have partnered with on our international learning exchange work over the last few years.  It was a privilege to be able to join them in their tent, and talk about Participatory Budgeting and citizen led democracy.  To hear their debates on digital exclusion, with strong representation from homelessness activists and disabled people.  To feel European and welcome.

We met briefly with the Danish Attorney General.  A real person, shock horror.  We walked next to their Chancellor of the Exchequer, with no security in sight.  I’m sure it was there, but not stuffed down our throats.  No security scanners or biometric testing to see a real politician close up.  That easy proximity to power made me realise that no-one has all the answers.  We are all just human beings.

During the four days I spent on Bornholm I made links with real people and expanded my mind.  I created some comic ‘personas’ of different sorts of citizens, and decided that I would shout out for this kind of stuff to happen here.  I grew up a bit.  So should we all … in dear old little England.

We are all valuable.  We all have an opinion.  And we all have something to add.