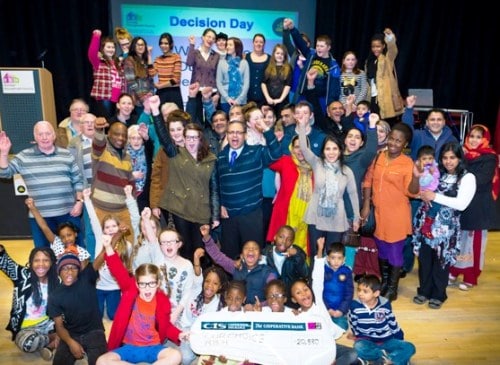 Recently I’ve been coordinating a citizen inquiry on elderly care at home, where social isolation is a key emerging theme to promoting well-being and preventing pressure on public services, such as costly hospital admissions. With an elderly mother of my own who is increasingly needing care at home it’s a subject close to my heart.

Not least because of my common interest in Participatory Budgeting (PB), that, like a citizens inquiry, aims to include citizen voice whenever and wherever public money is being spent. I believe PB can help reduce social isolation and promote social inclusion.

I’m not aware of much academic research on the impact of PB on social isolation, but it has been a feature of a number of PB projects in Scotland in recent years. Oliver Escobar is one academic who has made the link, and I have directly taken from his work below. He may have more to contribute I haven’t covered, from his knowledge of academic research on PB and social isolation? My blog challenge to him!

Following a question from yet another colleague on whether PB reduces social exclusion, I was spurred to do a further bit of background thinking… hence this blog.

I think there are many examples where PB support social inclusion. Both accidentally, in what emerged as an unintended consequence of a PB project; or by design, through the criteria used. PB grant making at the local level builds a sense of community spirit and connective-ness and allow members of ‘easy to ignore’ communities become more visible, and connect into things going on in their community.

The Edinburgh Canny Wi’ Cash example would fit this model. Nearly all the projects funded were around reducing social isolation among the elderly. “Our voice is being heard at last”, the title of their report spells it out I think.  But its one of many examples that might make the case. Like the North Ayrshire Mental Health PB, where tackling social isolation was one of the core themes. Or the Richmond Fellowship Scotland’s “Outcomes are fun” process, where opportunities to socialise among those with learning difficulties was the key goal.

That project in turn inspired the Triangle Housing ‘Outcomes are fun’ process in Northern Ireland, which again focussed on PB as a tool for engage residents. This time living within supported housing. In the first year it was themed as socialising within the housing unit, but in the second about engaging with their community… with some great projects coming forward, such as setting up a free dog walking service for busy neighbours, or distributing sleeping bags and toiletries to the homelessness.

Further afield, in Dublin, there was a PB process to engage with the traveller community, using 35,000Euro donated by a local councillor, from their own grantmaking funds; or PB projects for the older community of London: or the oft repeated example I give of a Manchester Police PB process that through a £3k grant a new domestic violence project got started that has now grown to be a significant force in the community.

Most of the above have either a health inclusion/wellbeing approach, or a community cohesion aspect. But inclusion goes much wider than that.

On a theoretical level we have seen experts in mental health call for PB as a tool to raise the general level of ‘mental capital’, (aka reduce the incidence of endemic poor mental health) and we know that the link between social isolation and poor life outcomes… in terms of general health and wellbeing, housing, education, economic equalities, mental health and among the elderly… is well proven.

I don’t think I am making a wild assumption that PB may be a preventative approach, in line with the Scottish Christie Commission’s recommendations to reform public services. By focussing on prevention we can free up much needed resource. A rough statistic being that up to a third of public money is wasted by not doing so.

I would argue keeping people connected, motivated, engaged in volunteering and involved in their community can reduce the cost of public services, and reduce, for example, preventable hospital admissions, to the benefit of all.

Putting a direct cost-benefit to whether PB really does bring about cost savings is hard. Its difficult to isolate the impacts of PB from other measures being taken within a community. But there is a case from Fife, where unemployed young men were encouraged to put forward and then undertake an idea they had come up with… to paint the stairwells of the housing block they were living, thereby raising their self esteem in the process. That might be another anecdotal example…. The story featured in a recent BBC documentary on Fife Council. I have also found a report from the Scotland Community Regeneration Forum’s website describing another PB process in Fife where a creative arts approach was used to build community conversations and provide means for creative expression.

Strengthening communities means they can do more, and public services can focus on what they do best.

And of course the inspiring Police Scotland Islamophobia PB was all about building relations between communities, to reduce hate crime and the fear of hate crime. Reducing fear is another important aspect of promoting social inclusion.

Finally in my web searches I found that internationally there have been reports on how PB and social inclusion can connect and empower women, especially within ethnic minorities.

All the examples above show how PB grant making and social inclusion links very closely. They go hand in glove. But we need to go beyond PB grants towards PB mainstreaming.

I could keep citing examples, such as the Midlothian Council’s Food Glorious Food anti-poverty PB projects. Oliver Escobar has, as stated before, also written about these themes, especially within the arena of health and well-being.

But in terms of mainstreaming PB (that is, building it ‘into’ not just ‘onto’ public spending) I think I would use Simon Cameron’s ‘journey of trust’ argument. Simon works for the Convention of Scottish Local Authorities (COSLA) and believes PB, done well, brings about a different culture, where participation is mainstreamed, and reducing inequalities front and central.

Always “do with, not to”. But the journey of trust from communities to officers is often shorter that the journey from those government officers to the community. Do public officials want to change? Do they have to be encouraged? Simon and I believe the answer to both questions is a resounding yes.

Money is the bait, not the fish. Asset based community development is always going to be focussed on being more inclusive.

Developing the argument I’m making a bit further, you might also look at the Glasgow Centre for Population Health’s PB research by Chris Harkins and James Egan, which linked PB with ‘asset based approaches’. Such as, way back in 2012 the report of PB in Govanhill which stated:

“PB has the potential to be a central mechanism in promoting localism and mobilising community assets. The report also describes how PB could have a role to play within the nation’s response to the Christie Commission” … “within Govanhill the PB process has augmented relationships between community members, public sector and voluntary sector workers, and has fostered increased trust, respect and reciprocity.”

This focus on ‘asset based approaches’ is a ‘buzz-phrase’ that might work on you, and is expanded within a thoughtful article by Cormac Russell, where the ‘fish’ of PB is social capital, and the ‘bait’ is access to match funding. Notably Seattle City, which is extensively referenced by Cormac, is also a home to a lot of interesting PB work… where youth inclusion was strongly featured.)

I’ll finish by offering a few action points to choose from if you are considering how to go about improving social inclusion, through PB, or through any citizen engagement strategy.

The first action point is a quote from Oliver Escobar’s report.

And my top choices would be:

I think this last point is a really important aspect of mainstreaming PB. One that draws inspiration from the work of Glasgow Disability Alliance on PB and equalities. Their report  highlights the experiences and views of disabled people in relation to their voices being heard in decision making processes.

Key learning and take away…

Social inclusion, and a focus on equality, takes work…
but is not a ‘nice too’…
its a ‘must do’.