Our Money, Our Planet. Participatory Budgeting and the Green New Deal 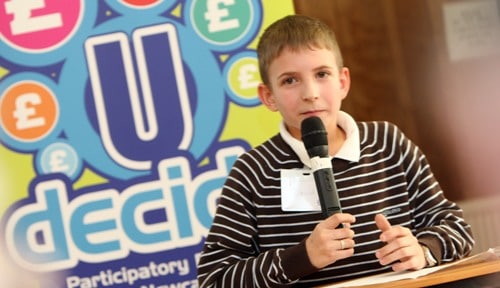 Participatory Budgeting(PB) enables people to make their community better, starting with issues that concern us all.  The biggest concern we face as a society is climate change. In this new blog Shared Future CIC’s Alan Budge connects PB and climate change.

In August 2018, Greta Thunberg, a fifteen year old Swedish schoolgirl, went on strike. She sat herself down outside the Swedish Parliament building and began a one-person ‘climate strike’. Just over six months later, schools around the world are now ‘striking for the climate’ on a regular basis. On March 15th, thousands of children across the UK as well as strikers in over 100 other countries skipped school in order to protest.

I was at a Participatory Budgeting (PB) voting event, where people vote directly on spending money in their communities, in North Yorkshire a few years ago; one of the participants there, a boy about the same age as Greta, said to me about the PB voting day, his face glowing with enthusiasm, “This has got to be better than general elections or any of that other stuff. It’s brilliant.”

I’ve been working on PB for over fifteen years now, and during that time have also, in common with millions of others, become progressively more alarmed about the state of the planet.

At its best, PB evokes genuine passion, real enthusiasm for change, for making a difference: and if one thing above all needs to change today, it’s how we tackle – or are failing to tackle – climate change. As I said to someone living in Norfolk recently, “We can do the best PB exercise imaginable, but it will have limited traction if most of East Anglia is under water.”

The recent ‘Green New Deal’ proposal announced in the USA by Alexandria Ocasio-Cortez provides a potential focal point for ‘how to green PB’. As well as advocating major infrastructural work around developing renewable energy infrastructure, retro-fitting properties to be more energy efficient and so on, the Green New Deal idea places emphasis on social justice and the need for participants to be meaningfully engaged with the design and delivery of the programme. Which is where PB comes in.

We know that a local PB event can attract literally hundreds of participants (often many new to political engagement). That is why we are interested in developing a programme of PB events, developed within the many Local Authority areas (58 and counting at the time of writing) to have declared a ‘climate emergency’ since December 2018. We want to call this programme Our Money, Our Planet.

These PB events would be ‘green themed’, allowing residents to vote on local environmental initiatives, whilst at the same time creating fertile territory for people to discover, debate and develop more strategic ideas relating to a national programme of green investment and renewal – a green new deal indeed.

We’re currently pursuing funding opportunities to develop the programme further, and are looking to hold some initial awareness-raising events in early summer, to bring together officers, elected members, environmental organisations and community members, to further develop the thinking around this project.

Forget Brexit: The climate emergency is the biggest challenge we face. We believe our most useful contribution to helping address this existential issue is through using our experience of, and passion for, PB, to help give practical voice to peoples’ all too legitimate concerns around what is looking increasingly like an impending climate catastrophe.

Alan Budge is one of the PB Partners, a team of passionate PB experts, coordinated by Shared Future CIC.

PB Partners will be at the upcoming CTRLshift emergency summit for change, in Stoke on Trent on the 9th-10th May 2019, where we will be discussing how to take forward Our Money, Our Planet. Find out about CTRLshiftsummit and book places here.

Shared Future is also connecting climate change into other forms of deliberative democracy. Find out how by reading Peter Bryant’s recent blog on Citizens Assemblies and Climate Change.