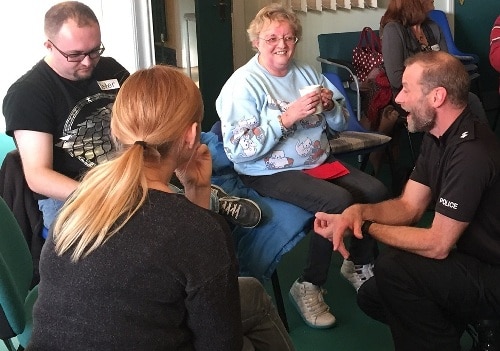 2019 is drawing to a close and it’s the season to be celebrating with our friends, neighbours and families the end of another year. Shared Future CIC may be a small social enterprise, formed way back in 2009 in the North West of England by a few good people. Yet we engage with some big themes in our work, like democracy, power and well-being.

As we wrap up another year (and it’s the 10th Christmas since we formed Shared Future CIC) we have been reflecting on what has changed, and why the idea of a shared future remains close to our heart.

Its not about what we have done, but our celebration of the hope, creativity and inspiration of the people with which we have connected.

We have a mission statement of sorts: “We can do that here”.

The biggest impact sometimes are the very local ones. Much remains to be done.

Voters, especially in areas affected by past economic decline, current austerity or the future risks or opportunities of Brexit have switched allegiances in droves. The centre parties are in disarray, and a vision of ‘for the many, not the few’ as espoused by the Labour Party has not been heard. The Conservatives are calling for ‘One Nation’ politics. But do we believe what politicians say any longer?

Politicians are one of the least trusted professions, with about 19% of people in the UK saying they trust them to tell the truth. Full Fact website, June 2019

Big divisions in our democracy are unlikely to go away. Whether that is the calls of the Scottish National Party to also ‘take back control’ from Westminster, the cracks within the Good Friday Agreement, or the howls of “fix” by the smaller parties; who once again see our first past the post electoral system return a minority government (based on vote share) enjoying a large majority (based on seats won).

The internecine fighting taking place within parliament over the last few years have further widened the gap between the electorate and those supposing to representing their interests. In the Netherlands up to 63% of people trust their government. In the UK we haven’t seen that level of trust in many years.

Income inequality has risen sharply since the 1970s in most advanced economies around the world, and has been blamed for increasingly polarised politics.
The Guardian website. September 9, 2019

Underlying  recent election trends are others, which further call into question whether our democracy and our neo-liberal economic system is fit for purpose. Economic inequality in the 7th richest nation of the world has seen a massive increase in wealth amongst a very few, and squeezed incomes for most of us. Alongside real and enduring poverty for some.

At the same time we are facing a crisis even more extensive and difficult to solve than Brexit. Whilst the climate emergency has been steadily creeping up the political agenda it’s seemingly impossible for multi-lateral agreements or national governments to solve, or even begin to grasp the scale of the challenges ahead. The Madrid Climate Conference, moved from Chile (where political unrest made a meeting of world leaders impossible) has just failed to agree any new carbon targets.

It would be nice to step back and reflect on all the good work we have been connected to, and recuperate from some hard knocks and bruises from the challenges we face.

Its not always easy running a social enterprise in times of public sector austerity. We can’t say we’re not worried about what the next few years might bring, especially for the most excluded or vulnerable people in our communities.

It’s important to put a bit more trust back into the mix, and a bit of hope. But that is a big ask, when current projections are that we are on target for a 3 to 5 degree warming in our climate within one lifetime. Climate change is going to dominate and threaten all of our lives, and rightly a theme we are increasingly focussing upon.

Where next? Can we rebuild trust, through trusting the citizens next door?

Maybe ideas such sustainable livelihoods and the social economy, where it is a wise and rational act to put aside self interest and co-operate in order to support each other. Considerable evidence exists that low well-being, poverty and social isolation go hand in glove. Connecting people, and giving them ways to influence and contribute to their community makes a massive difference.

Working at all levels at once? We can do it here

“The way power works at every level, at the United Nations or in your neighbourhood, is… do you have a community that stands behind what you stand for? And if you do, you’ll have more power. And if you don’t, you won’t!” Barack Obama, November 19, 2018

We might wait for our leaders to take action, but we might wait a long time. Yet time is something we no longer have to spare. We do have some solutions though. Ones within our grasp. Ones that are about building a better community and a shared future. Which is simply a clumsy way to say that together we are stronger and together we can take positive action. It doesn’t matter about the scale. We think there are some basic ways we can do something. That work at every level.

Surely its great if our government institutions, local councils and political leaders support citizens, but positive action doesn’t depend on that. Any citizen, community, city, or indeed any nation can take action for themselves. These are the three pillars for taking action we at Shared Future CIC are trying to build.

We promote a more deliberative democracy through our citizens’ juries and mini-publics.

Where we bring people together to talk through big issues, like how can we improve mental health in our community, how can we create well being, and how can we respond the emergency of climate change. We facilitate and encourage open, honest debates on issues of public concern.

These had included issues of community well-being, mental health, climate change and many other topics. We are proud to be new members of the International Democracy R and D network.

Whenever there is a resource to be spent we can leave the decision to one or two experts, or we can involve anyone with a stake or a share in that resource.

We promote participatory budgeting. In a neighbourhood, in a city and beyond.

Any resource can be shared more widely, and the more people involved in how that happens the greater the trust generated, the better the decisions taken and the fairer the outcomes.

That can include work in schools, communities or even sometimes at a national level. Next year we are focussing on using Participatory Budgeting(PB) to address climate change and PB with young people more than ever before.

Find out about our participatory budgeting work

Shared Future CIC have been supporting other social enterprises to flourish for over 10 years.

We are inspired by how people work together and cooperate to solve problems ‘in community’ with others. It is possible to value our exchanges in more ways than money and profit. That is why Shared Future CIC promotes social enterprise.

Whether its a informal circle of friends bound by common interests or a well structured social enterprise operating internationally the principles of the social economy hold true. Collective communal ownership, with everyone involved, and everyone valued.

Stronger together means that “We Can Do That Here”

Putting all this different engagement and empowerment work together is, we think, a recipe for success. Each of these ideas strengthens and compliments each other. But we can not do it by ourselves.

That is why we are also backing or giving time to supporting projects such as the Participatory Budgeting Global Hub, the Citizens Convention on UK Democracy, or supporting the neighbourhood based work of Empowering Places.

At whatever the level, whether international, national or local, if we have a community that stands behind us, that we trust, and who trusts us, then we have more power. More ability to act. We can all take back control in our communities and our neighbourhoods if we use the right tools.

Wishing you all a happy and prosperous 2020 from SFCIC.