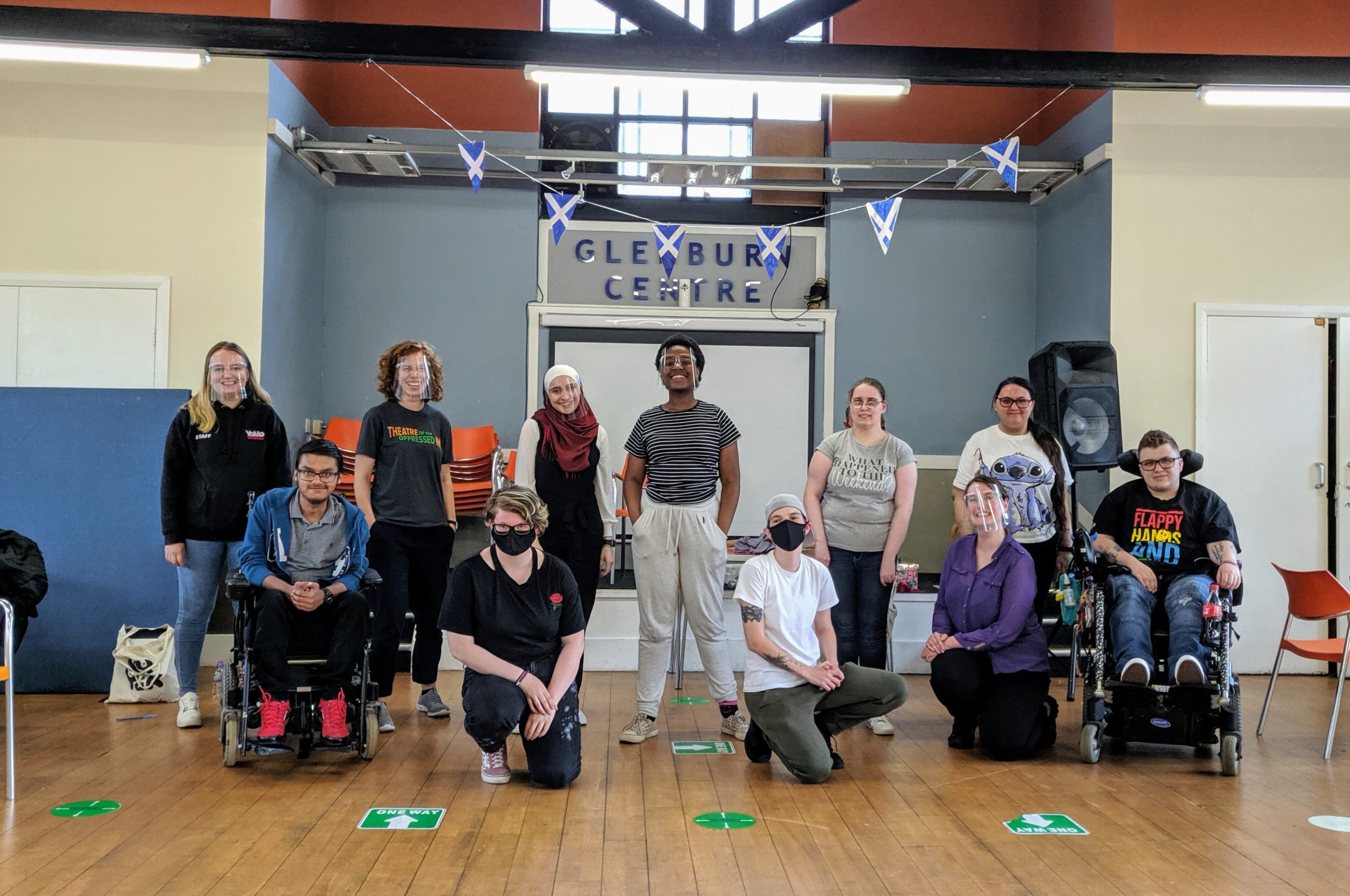 Deliberative and participatory processes remain one of the best ways of building a democracy where everyone’s voice counts.

However, these processes can be exclusionary, prioritising certain forms of ‘rational’ communication over less formal ones.

People communicate, learn and express themselves in a variety of ways. Some are more verbal than others, some more visual, some more creative.

We must recognise this and give people a range of opportunities in our processes to communicate in the way which most empowers them.

In the second of a three-part blog series, we look at how the playful performance of Democracy Pioneers amplified the voice of young Glaswegians in climate policy making conversations.

The power of humour allows us to wrestle with challenging topics.

This was best illustrated when we facilitated Democracy Pioneers, a project to engage Glasgow policymakers on climate change through the medium of theatre.

In 2021, eight young Glasgow residents gave several performances to Glasgow City Council employees. They acted out scenes exploring how public transport could be more accessible and affordable, and how neighbourhoods and open spaces could be safer and meet the community’s needs, in order to decrease emissions and reduce the need for travel.

The performances were best when they were playful, frequently breaking the fourth wall in comedic fashion. As Shared Future Associate Katy Rubin and Charlotte Bamford, one of the participants, wrote of the July performance for Forge Magazine:

“We took a leap and called up a receptive Council staff member to ask if he’d perform in the play with us to reflect the problems from the inside. He joined our rehearsals and, from the first moment, was willing to go farther than we’d imagined in satirizing the behaviors of people in power. He played a council person stuck to his phone, ignoring young people even as he asked for their participation.

“In another new scene, set at a community-engagement event in the park, he stood behind a sign and rebuffed everyone who tried to engage. One character asked where all the bees had gone, and he bombarded them with scientific language until they walked away. We had fun with the scenes, which allowed us to take a risk. We hoped our audience would laugh along with us.”

The young Glaswegians held a workshop performance in late July for Council staff where they began to develop policy proposals. They clarified that they wanted to address communication challenges between the Council and young people regarding shaping sustainability policy. They also stressed they had a lot of knowledge and experience which should inform policymaking.

In the September show, they added new scenes to the play to reflect those challenges. They were also joined by a guest actor: a council staff member from the transport team, who embodied powerfully (and hilariously!) those issues from a council perspective.

This set the scene for a robust and lively debate and some funny solutions improvised on stage. In one performance, the Head of Sustainability for GCC, Gavin Slater, came on stage, took on the costume of a bus driver, disregarded a passenger’s insufficient fare and allowed them on the bus – which, he said, pointed to the ways in which Council should support front-line gatekeepers in being more flexible with rules, when it allows residents to make more sustainable choices that they otherwise wouldn’t afford.

Through a unique combination of humour and constructive criticism, Democracy Pioneers allowed a difficult conversation about power and exclusion to be swallowed by council officers more — and for young people to push harder for policies which would improve their lives.