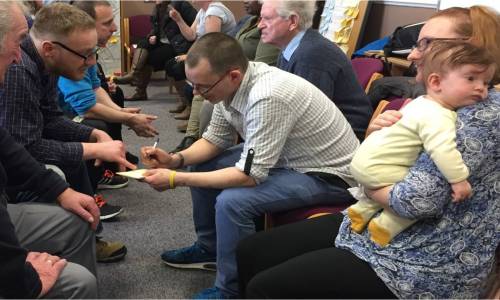 ‘I’m in recovery from alcohol addiction. I got involved so I could have a focus and something to be involved in on a regular basis. I didn’t know what to expect. For me personally it’s been a huge achievement. I’ve gone from being so isolated that I didn’t speak to another person for six months to talking in front of 50 people at the launch event. It’s been brilliant.’

Clearly the Inquiry had a big impact upon this 38 year old resident of Central Blackpool. We were privileged enough to hear similar stories from a hugely diverse group of twenty two other people who volunteered to take part in the Central Blackpool Health and Wellbeing Inquiry. The Inquiry met nine times between January and May 2017 to try and answer the question:

‘for people living in Central Blackpool what are the main things that affect people’s health and wellbeing and what can be done about them?’

The process was commissioned by Blackpool Council’s Public Health department as a way of finding out what local residents think after an intense period of deliberation, where they were given the chance to share experiences and opinions, to challenge each other and to question a range of professionals before writing their own recommendations on what needs to happen.

Participants ranging in age from 18-80 talked about alcohol, isolation, safety, community, tourism and mental health, before drawing up a set of prioritised recommendations.

Amongst other things the group are particularly concerned about the management of a local recreation facility, mental health services, local resident awareness of  local services and the actions of local GPs, notably a frustration with 10 minute appointments and doctors using ‘a quick fix medication route rather than get to the cause of the problem’. In the words of one participant:

‘I felt bad from all the pressure of family responsibility and not being able to afford stuff. I turned to alcohol and awful things. Things that got me through was speaking to people – so GPs should recommend things like this’

Some of the group continue to meet to push for change and have already successfully influenced a change to the existing Clinical Commissioning Group GP contract regarding appointments.

Download the report below or watch two of the participants, as well as Blackpool’s Director of Public Health (Dr Arif Rajpura) and one of the facilitators (Nick Beddow), who were interviewed at launch event on the 4th May 2017.